Ignoring Giraffe on the Highway: Spiraling Inequality Is Really What Ails Education

Posted on March 13, 2013 by Dr. Julian Vasquez Heilig One comment

The public discourse about education is full of “zip code should not determine destiny” memes. The reasoning is— if we ignore the giraffe driving down the highway (poverty), it won’t exist or matter. The challenge with treating the symptoms of a disease rather than the causes, is that the outcomes remain inconsistent. For example, if you get a tummy tuck, but don’t change your diet and exercise routine, you will likely be back to square one. Can we really ignore poverty and expect consistent results from our educational system? I believe this is the issue that ails the sexy educational policy solutions. At their core, reformers that support various “panaceas” often believe they can ignore poverty.

In a recent article entitled Teachers Make Handy Scapegoats, But Spiraling Inequality Is Really What Ails Our Education System, Linda Darling-Hammond, Stanford Professor of Education, addressed poverty and student success. Here are a few excerpts of her thoughts for your viewing pleasure:

With that very high poverty rate, our average scores on international tests look a little above the average in reading, about at the average in science and somewhat below the average in math, and a lot has been made out of that in the United States. But in fact, students in American schools where fewer than 10 percent of the students live in poverty actually are number one in the world in reading. Students in schools with up to 25 percent of kids living in poverty would rank number three in the world in reading, and even schools with as many as 50 percent of kids in poverty scored well above the averages in the OECD nations – which is mostly the European and some Asian nations. Our teachers are doing something very right in terms of educating kids to high levels in much more challenging circumstances than children face in other countries.

The place where we really see the negative affects are in the growing number of schools with concentrated poverty, where more than 75 percent of children are poor. And there — the children in those schools score at levels that are near those of developing countries, with all the challenges that they face.

In most of the countries that rank near the top and have equitable outcomes, they spend the same amount per child in each school and sometimes they add money when they have low income or new immigrants in a school. It is just about the reverse in the United States: we have some states that spend as much as three times more than other states, and the high spenders are not surprisingly the high achievers, like Connecticut, Massachusetts and Vermont.

The low achievers are not surprisingly the low spenders – Mississippi, California, Louisiana. But then within states it’s quite typical for the high-spending districts to spend three or four times as much as the low-spending districts. In New York right now, the spending out in Scarsdale or Long Island is significantly higher than the spending in New York City, which in turn is higher than some of the poor rural areas.

That translates into differential salaries, differential working conditions, differential class sizes, etc. All of those things add up to produce a very different quality of education from one school community to the other.

Then there are the general things you would expect – about having books in the home, opportunities to go to museums, enrichment activities and all of those kind of things. I mentioned pre-school already, but there also the affects of things like stress. It’s very stressful to be a low-income person in the United States. There is eviction, there are people who are homeless, and in a number of districts near me in California we actually have as many as one in 10 kids who are homeless right now. Homelessness has been increasing, and 40 percent of the homeless are families with children. You have the stresses of unemployment, of making ends meet, and stress actually impedes learning. There is a whole physiological response to stress that shuts down cognition.

There are, of course, relationships between students’ circumstances and test scores in general. For many, many years studies have found that 50 or 60 percent of the difference in achievement scores is accounted for by various socioeconomic variables, like income and parent education and similar variables. So you have these differentials in access to learning resources, and in some of the lowest income communities you have class sizes of up to 40, even in the early grades – in kindergarten and first grade. All of those are the aggregated effects of the way we treat children in poverty in this country and in specific school systems.

Not all educational policies ignore the giraffe on the highway. Notably, the Harlem Children’s Zone seeks to address the core social issues that impact student achievement. The U.S. Department of Education Promise Neighborhoods (for which I reviewed grant proposals in the past) was an offshoot of the Harlem approach. Sadly, I am hearing from sources in DC that it appears the Obama administration is going to cancel and/or phase out Promise Neighborhoods.

We can continue to ignore the giraffe on the highway, but the outcome for our communities will likely not be what we desire. See what happens here. 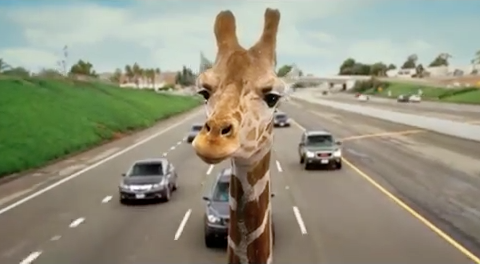