I suspect P.T. Barnum would be proud of the showmanship eminating from Louisiana— an educational policy circus. The Recovery School District has been acclaimed as “a game changer for New Orleans” and very likely today be up for a vote in the Texas House in Senate Bill 1718— and perhaps soon in a Legislature near you. 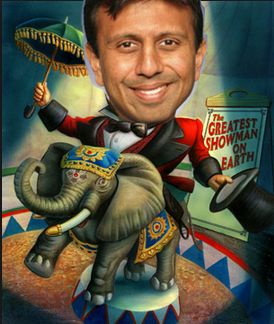 What we know from Louisiana so far…

“The bigger the humbug, the better people will like it.” P.T. Barnum

Louisiana has trumpet their educational reforms across the nation. Secretary Duncan is also a fan. The Washington Post reported he stated:

I think the best thing that happened to the education system in New Orleans was Hurricane Katrina.

Here is what is interesting about Louisiana that many people don’t know. They are desperately trying to control who accesses public information (data) to examine their “educational miracle.” I have been holding on to this story since 2012 because we have made friendly attempts to gain access to Louisiana data for 10 months. In fact, we have made requests to Louisiana on seven seperate occassions since August 2012. When this did not yield data, we made a public information request for an existing dataset already given to CREDO. Louisiana is required by law to respond to public records requests within 3 days, its been more than 90 days and Louisiana has not responded. It appears I will now have to file a complaint with the feds and the LA Attorney General. 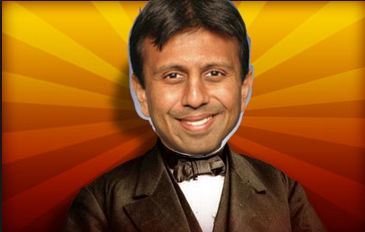 I am not the only person who Louisiana is dodging for public information about their educational system. I reblogged a post from Louisiana Voice a few days ago. DOE agrees to pay legal costs and late fees for not producing records in settlement of LouisianaVoice’s public records suit

The organization Research on Reforms in New Orleans is also suing the state for access to data to conduct academic research. Parties to the suit are Dr. Barbara Ferguson and Dr. Charles Hatfield.

I contacted CrazyCrawfish, a Louisiana based blogger to ask about the purported success of the Recovery School District and why Louisiana only provides data to particular researchers via public requests (incidentally, or perhaps not, none of whom are people of color). His response:

I’m actually trying to get info to dispel these constant misrepresentations.  The data coming out of RSD is fraudulent and the results are based on manipulating students into leaving and falsifying exit codes/reasons so the student stops getting counted in the denominator. [This sounds strangely similar to this and this] Karen Harper Royal can probably tell you more about that as she’s on the front line and has come across these students living in the street that supposedly transferred out-of-state.  This is a statewide issue, but especially an issue in RSD and charters who counsel out and expel students out every year from 9th grade thru 12th grade.  RSD schools and charters then essentially report their grad rates as the students who get diplomas that were enrolled in 12th grade, and those results are still crappy.  I have a post describing the data misrepresentation that happened on my watch,

But I need to graduate counts to show how off the reported grade rates are and LDOE refuses to provide them – for good reason.  Other recent RSD articles.  One I reblogged from Diane who pulled in from Mike Deshotels, and another one of my own calling for the dissolution of RSD. 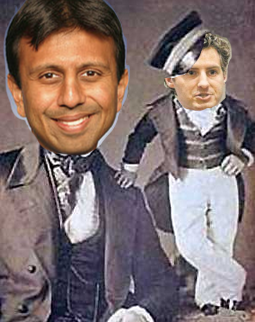 Both the current RSD website and the 2012 LDOE school-level spreadsheet include information on the very first RSD school, Pierre Capdau.

Pierre Capdau, the very first school to be assumed by RSD in 2004, remains a state-run, RSD-NO school.  After eight years, Pierre Capdau has a D for its 2012 letter grade. I have never heard any reformer boast of the “miracle” that is Pierre Capdau. It has not succeeded according to the reformer-determined definition of “success.” Pierre Capdau has never been “transformed” as a result of its state takeover.

That right there ought to give pause to those tempted by the veneer of a New Orleans Miracle.

There is much more:

Of the 60 state-run RSD schools (59 from the RSD website plus omitted Nelson) included on the DOE 2012 school-level data spreadsheet (both admin and public versions), none received an A as a school letter grade.

One RSD school, Gentilly Terrace, received a T, meaning no grade this year. A free pass.

According to Jindal’s and the State of Louisiana’s definition of a failing school, the remainder of the RSD schools given letter grades are failing.  That’s 90%.

She summed up the RSD approach by stating:

A lie packaged to only look appealing from afar. 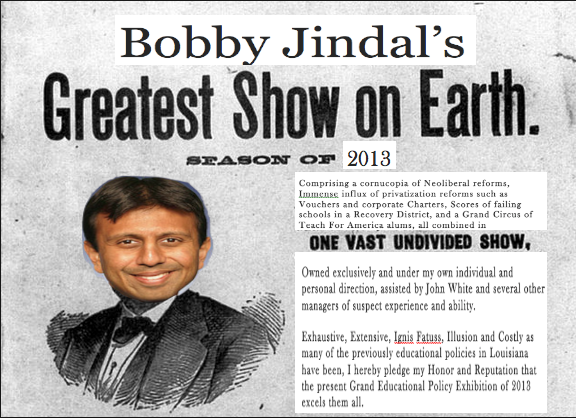