It has been common knowledge for a long time that high-stakes tests have a disparate impact on students of color. What is interesting about high-stakes testing is that proponents recently reframed the gap in the NCLB-era from discriminatory to instead being about “Civil Rights.” I wrote in the post Segregation Nation: Recap and video from visit to @MSNBC @MHPshow:

Now we talk about tests not as purposeful discrimination and sorting of students, but that the “achievement gap” is a Civil Rights issue. The purposeful sorting and discriminatory design has been pushed to the side by “reformers.” 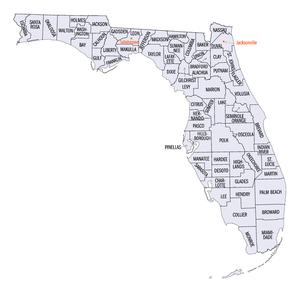 The disparate impact high-stakes tests were challenged in Florida in the US Supereme Court Case Debra P. v. Turlington. We wrote about Debra P. in a peer-reviewed article published in the Journal of School Leadership entitled High Stakes Decisions: The Legal Landscape of High School Exit Exams and the Implications for Schools and Leaders.

One of the earliest and most influential cases with respect to exit testing is the Debra P. v. Turlington (1981) case, in which African American students who had failed the Florida functional literacy examination known as the Florida Student State Assessment Test, Part II (SSAT-II) challenged the state law requiring a passing score to receive a high school diploma in Florida. The plaintiffs argued that the test was not given with adequate notice, and that the testing requirement was racially biased because “at the time of the 1979 hearing, after three test administrations, the failure rate of black students was approximately 10 times greater than that of white students” (Debra P. v. Turlington, 1984, p. 1405).

In Debra P., the federal district court judge established two central requirements for exit testing linked to diplomas: sufficient notice and curricular relevance. To satisfy due process, the court ruled that notice must be given to students about the academic content several years before the test is implemented. The Court also required that the schools must establish “curricular validity” by demonstrating that they have, in fact, taught what is assessed on the exam. The Debra P court concluded that the “state may condition the receipt of a public school diploma on the passing of a test so long as it is a fair test of that which was taught” (Debra P. v. Turlington, 1981, p. 406).

This ruling was upheld on appeal to the 5th Circuit Court of Appeals in 1981, which remanded the case to the district court to determine whether the Florida test met the advance notice and curricular validity standards laid out in the 5th Circuit opinion. In 1983 the district court judge ruled that the state had in fact given advance notice to members of the class of 1983, and had proven not only that the test was valid and fair but that the diploma sanction would in fact improve learning conditions for students who were attending schools that had recently been desegregated. The district court concluded that whatever racism that did exist in the schools be eliminated as a result of the test, writing that “… to the extent that insidious racism is a problem in the schools, it would seem that a test like the [exit test], with objective standards and goals, would lead to its eradication” (Debra P. v. Turlington, 1983, p. 188).

This decision was again appealed by plaintiffs, this time to the 11th Circuit Court of Appeals  (which was created as the result of a division of the 5th Circuit). The Appeals court again affirmed the district court judge ruling, writing that:

The court concluded that the state could institute the FCAT as a graduation requirement, ruling that: “the State of Florida may deny diplomas to students (beginning with the Class of 1983) who have not yet passed the SSAT-II” (Debra P v. Turlington, 1984, p. 1405).

So courts have recognized that the high-stakes exams had a disparate impact on students of color, but they were okay with that because they would magically lead to the “eradication” of “insidious” “racism.”

In the post Brown v. Board Fails: Resegregation is Accidentally on Purpose #Brownat60 I argued that our legislative and judicial bodies claim that their policies are race neutral, but they are well aware of the disparate impact of their policies in the data, and they continually shrug their shoulder in denial that their action or lack of action is discriminatory or without racial intent (similar to the argument being used to suppress voting), when in fact, prima facie, they do. The powerful legislative and judicial bodies in the US accidentally on purpose codified a system in which society, especially the poor, is sorted by high-stakes exams. High-states tests are a Noble Lie. The American judicial system and legislatures have taken an overt Jim Crow system of racial prejudice and discrimination and instead codified a covert system that continues to have disparate impact.

AG Eric Holder (#hero) has recently expressed interest in the disparate impact of policy on minorities. Will high-stakes exams be in his purview?

Here's what's coming! I'm excited. @TCPress
My Grandfather Tiburcio Vasquez appears in The Field Guide to Michigan State History picking cherries in northern Michigan. Latinx history is American history! #hispanicheritagemonth #latinxheritagemonth
Let’s Go Blue! 〽️🏈#wearmaize #maizeout
As the outer bands of what used to be Hurricane Ida bring rain to Lexington, my thoughts and prayers are with those that felt its brute force over the weekend.
I binged watched #TheChair on @Netflix as #homework The show does accurately cover some of the drama and pain of academia. But there is JOY too! The drama makes for better TV apparently. As academic leaders we must focus on the humanity of our work and lead dialogically.
Welcoming the new @ukcollegeofed Freshpeople with snacks!
Behind the scenes at the virtual 2021-2022 @UKCollegeofEd faculty and staff retreat. Our leaders must step up and serve in these unprecedented times!
*human
Enjoyed keynoting for 1,500 Jefferson County Public Schools @jcpsky educators today. Introduced some new thinking about restorative ecologies and deeper learning. #jcpsdl
MSP to SDF to keynote for Jefferson County Public Schools.
Landed in North Dakota to give a keynote about equity and school leadership at @ndsu_official. Only three states to go to see all 50. Thank you for the welcome dinner @hj_mackey and @amandajocordova
CloakingInequity.com is 9 years old today! More than a million readers from 200 countries. Thank you for being on this journey of discovery and advocacy with me!
#Greatquote
Congrats to @ukcollegeofed alum Brittany Cervantes for her homerun today in the Olympics! @usasoftball @universityofky
I want to thank the native Hawaiian people for the opportunity to visit their land. I hope I properly cared for it and appreciated its sacredness.
Honoring the memory of Aunt Patricia Scott this afternoon. A life long educator, teacher, principal, superintendent and professor. I’ll blog soon about her inspiring example.
There are vast opportunities at HSIs, MSIs and HBCUs for academics to make an impact for communities of color.
Riding in the back of the @capt.andys Zodiac boat guarantees a good drenching from the Pacific Ocean.
Repping @ukfootball at one of the best and most sacred beaches in the world.
Clearly @HowardUniv now has the real life #Avengers! There can be no heroes and heroines in the plot without villains. #Superpowers @nikolehannahjones @tanehisipcoates