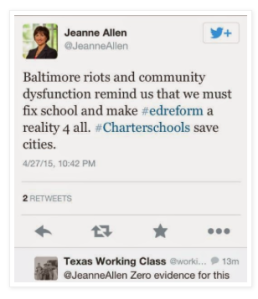 In the post, Exclusive: Students Tear Gassed By Police While Protesting School Inequality I asked

Are you ready for more protests?

School “reformers” have argued that the Baltimore uprising is a call for more market-based education. I argue the opposite is actually true.

I was involved in crafting the Network for Public Education’s response to the Baltimore Uprising. Here is our statement:

The death of Freddie Gray while in police custody is a national tragedy. We support his family and the millions nationwide who call for justice in his case. We support the thousands who have peacefully joined protests for justice. The national media coverage of the Baltimore uprising continues to sensationalize the violent responses of some of those protesting while ignoring the thousands of people across the country peacefully gathering to demand an end to violence inflicted upon our communities.

We will watch intently the outcome of the charges filed yesterday against six police officers allegedly involved in the death of Freddie Gray.

However, the pursuit of justice must not be isolated to this single case. Cries for justice should not only surround Gray’s killing, but also include many people of color who are disproportionately targeted, arrested, and killed by police across the nation.

We also seek justice and fairness for millions of students who are subject to inequitable treatment in our nation’s schools. At the Network for Public Education, we fight for strong public schools and the right of all students, current and future, to receive a quality education.

Notably, across the United States, there are educators implementing restorative justice practices in schools to build affinity and de-escalate tensions before they lead to additional violence and a school-to-prison pipeline. Schools often exacerbate the criminalization and dehumanization of our youth, but they can and must be part of the solution.

At our recent national conference, many spoke on the need for communities of color and education organizations to coalesce to fight for social justice. Some spoke on the need for us to address racial injustice and inequities more directly. We encourage our members and educators everywhere to teach, discuss and learn with and from our students about these issues.

We stand with the people of Baltimore crying out for a nation to see their pain from persisting injustice and inequality. We stand with the students of Baltimore who live in a school system inequitably funded and resourced, who have expressed to the nation that they feel oppressed and ignored.

Also, check out the Baltimore Uprising syllabus for teachers in this tweet

Here are videos of 2014 Chilean student protest from my YouTube feed that UT-Austin students took while conducting research in Chile on vouchers.

Then this happened: Exclusive: Students Tear Gassed By Police While Protesting School Inequality

Lourdes Perez Ramirez from Hispana.edu was in Santiago when the Chilean police responded to ongoing Chilean Winter protests in 2014 by tear gassing students protesting 3 decades of market-based education policies that they argue have accentuated inequality. Here are the email report I received:

We have been in the middle of a student demonstration; got tear gas; were hidden by a business woman so we did not get wet with water cannons.

Students were occupying the Ministry of Education on Wednesday August 20 (we almost we didn’t get in to see our contact) and the protest today was relatively peaceful (the part we observed) but we all got tear gassed. Metro subway exits were blocked preventing us from getting to street level because of the protest.

My research concurs with the students. Market-based policies foment segregation and help the few at the expense of the many. I have discussed the failures of markets, specifically vouchers, in the research literature on vouchers in the US and in Chile. We also published a peer reviewed paper on the segregation and ill effects of a universal vouchers system last year in the journal of Educational Policy Analysis Archives. I profiled the paper in the post New Research: Vouchers Increase Segregation and Offer Benefits to the Few. A second paper examining market-based education reforms is forthcoming in another peer-reviewed journal. When it’s published, I will release it here at Cloaking Inequity. 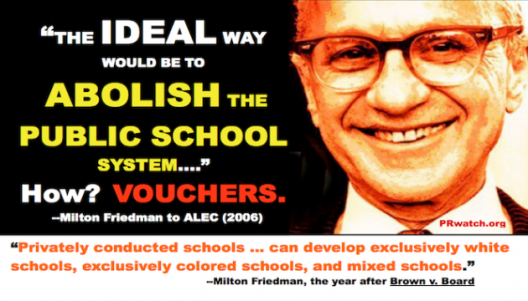 There is no mystery what market-based education does and who it serves— we have plenty of evidence on unregulated choice markets. In the essay entitled National experiment in school choice, market solutions produces inequity Alfredo Gaete and Stephanie Jones wrote,

Indeed, Chilean education reform from the 1980s to the present provides the writing on the wall, so to speak, for the United States and we should take heed. Chile is now engaged in what will be a long struggle to dig its way out of the educational disaster created by failed experimentation and falsely produced miracles. The United States still has time to reverse course, to turn away from the scary language of crisis and the seductive language of choice and accountability used in educational reform, and turn toward a fully funded and protected public education for our nation.

They then responded to the Cato Institute’s criticism of their initial essay in Why competitive model fails schools. No one should lose in education. They wrote,

Not everything is a competition, not everything should be designed as a competition, and education – especially – should not be treated as a competition where there are guaranteed winners and losers. No one should lose in education. Education is a public necessity that calls for collaboration; the sharing of resources, information and practices; and justice. It should be the job of a healthy state aiming for the common good, not a game for businesses with a focus on profits, losses, and hedging financial bets.

If school “choice” supporters get their wish for an unregulated market for schools in the United States— I believe we will likely see more student uprisings. Why? After 30 years of market-based policies, that is what is happening in Chile— students have protested (often violently) the glaring inequities in their system. Supporters of school “choice” want you to believe that school vouchers and charters “work” and promote civil rights. I wrote in the post Billionaires co-opt minority groups into campaign for education reform that the reality is just the opposite.

p.s. Considering the success of the Newark Student Union, the Chilean student protest et al. My latest project is a new one-day social justice and media workshop for high school students. I will pilot the workshop on May 17 here in California for a group of students from a national civil rights organization.

For all of Cloaking Inequity’s posts on charters click here.

For all of Cloaking Inequity’s posts on vouchers click here.

Check Grand Canyon views by helicopter off bucket list.
Birthday vibes
Hungry?
Dear stomach, are Vegan chick’n nachos ok in my 40s at this time of night?
There’s a veggie burger under the Philly style. @bobbyflay
I’ll have a new chapter about charter schools and school choice written for Black parents in @DavidCBerliner upcoming book!
The first thing I thought about when I heard the news was that mi abuelitas (my grandmothers) Maria Vasquez and Herminia Ovalle Vasquez would be proud. It's an honor to join @AAHHEorg board. I was a fellow way back in 1998. #university #highereducation #education #diversityequityinclusion #educationalequity #educationinsights
#this #musttry
Gorgeous day today!
Was watching a little MSNBC today and it turns out they cited our study in the Hispanic Journal of Law and Policy about faculty diversity! Although they didn't get the citation year right. 🙂 http://stcl.edu/Journals/HispanicLaw/2019/2019Heilig1-31.pdf
#babywhisperer
I support @nhannahjones It’s a travesty that the @UNC trustees denied her tenure. It’s a dangerous precedent to allow politics to cancel and deny global examinations of race, racism and communities of color by academics and the media.
#graduation The most glorious moment of the academic year! Congrats to the new @ukcollegeofed alumni! #bbn #GoCats
It’s that time a year! Celebrating our 500 @ukcollegeofed graduates with 500 claps! #GoCats #BBN #oneofthosedaysyoudontwanttoend
#new #sunglasses #readyforsummer Thanks @emporioarmani !! (Not a sponsored post)
Justice!
So proud and amazed by the @SacStateEDD #Cohort12 Congratulations on your #graduation! Miss each and everyone one of you!
This! H/t Dr. Walker
Happy Mother’s Day!
My @Stately_Men unboxing for May 2021! I’ve been a member of their concierge fashion stylist service for about six months. #highlyrecommend They’ll learn your preferences, size and improve professional and casual style. Join here http://stately.refr.cc/julianheilig