I don’t believe that this has been reported anywhere else. Last week at the NAACP National Convention in Cincinnati, the delegates voted in a new resolution on charter schools. It’s approval as policy will not be official until the National Board meeting in the Fall of 2016. However, this is a big news story that (I suspect because of the political conventions) has not yet entered the traditional media.

Yesterday in the post How will history remember the @NAACP on charters? I discussed the 2010 and 2014 NAACP charter school resolutions. The 2016 NAACP convention voted and approved the following resolution. I am honored it originated from the California Hawaii NAACP, where I serve as Education Chair. 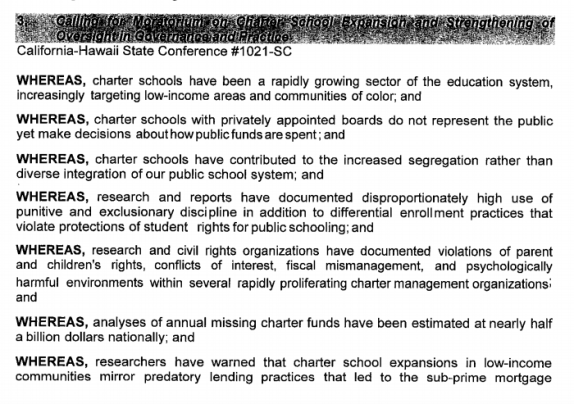 The 2016 NAACP delegates at the national convention called for a moratorium on the proliferation of privately managed charters.

So for those of you who emailed me yesterday saying that NAACP chapters in various places have gone rogue supporting charters— know that the force of the national organization is NOT on their side.

In sum, I believe the NAACP, the nation’s vanguard of civil rights, has AGAIN demonstrated and articulated critical leadership sorely lacking from many other civil rights organizations on the issue of school choice.

For more on what’s going wrong with charters click here.