Review: The History of Institutional Racism in U.S. Public Schools

Susan DuFresne recently contacted me and asked for a review of her new book The History of Institutional Racism in U.S. Public Schools. I relayed that I have already committed to 9 manuscripts (6.5 are finished) this year plus I owe Teacher College Press a book prospectus. So I asked Theresa G. Reed, one of California State University Sacramento’s most talented Doctorate in Educational Leadership students, to consider the task. 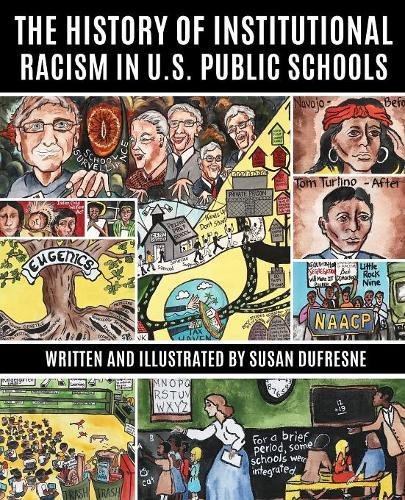 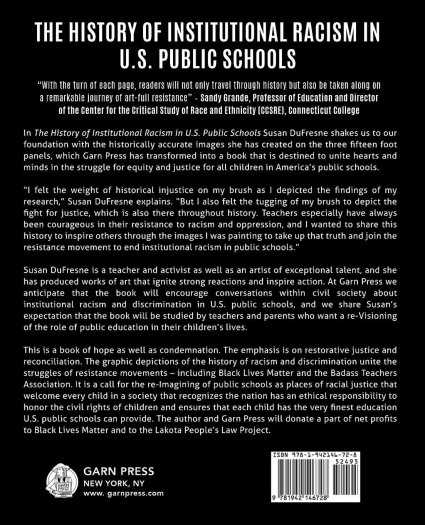 Susan explores how marginalizing the oppressed has led to countless profits for the privileged who are indulged by their status to get richer and richer leaving the poor to struggle. After the exploration of Susan’s panels, one would discover what it must be like to be caught in a web of institutional racism and dysfunctional public schools. However, one does not have to ponder long as Susan does an outstanding job through visuals in describing the plight of people of color in America. She delves deep into the shame–the humiliation of discrimination, racism, racial violence, and not being educated. This humiliation is depicted quite powerfully in her panel-by-panel discussion of historical and current racial terrorism. From the Trail of Tears to the march on Washington to police brutality, she captures the effects of the consequences of segregation, discrimination, and attending some of the most egregious and underfunded public schools in America.

The panels progress as a year-by-year description of minority struggles that reveal their 2nd class status, lack of wealth, and the non-existing respect that they command from the public. Most people of color are still trapped in underfunded public schools with little or no hope of obtaining the education they deserve to compete in today’s global economy. Susan depicts how minority students are often caught in the long legacy of racism that starts in the public schools, with existing zero tolerance policies that punish minority students harsher than their peers, often ending with prison sentences.

These legacies, formed before the Brown v. Board education era, forced African Americans to fight for the right to attend decent public schools. As Susan describes the intermingling web of chaos for these individuals in her panels, she gives a real picture of what it is like for some of America’s poorest citizens. Their future is the school to prison pipeline—a revenue generating hypocrisy that is akin to the “Energizer Bunny”—that keeps going and going and is an example of legalized slavery for minorities in America.

In the end, Susan’s images inspire the viewer to appreciate that these historical injustices and their consequences have been acknowledged in such an impactful way.