I might be partially to blame for this one. Several years ago I was invited by the National Urban League to serve on a panel about education and school choice. The panelists included Steve Perry and Congresswoman Jahana Hayes. Watch the panel here. I stressed community-based solutions for education instead of privatization and private control. Well, I found out after the panel that it was funded by the Walton Family Foundation. After I came off the stage, a high-level representative from the Walton said to me “Julian, we agree on more than we disagree on.” I looked on, not knowing how to respond. I had never thought of my thinking about community-based reform as being aligned with the Walton Family Foundation’s agenda. The representive said it again and reached out to shake my hand, “Julian, we agree on more than we disagree on.” I looked on again. Well, now the comment is making more and more sense. I wrote some time ago about this emerging astroturf (fake grassroots) strategy when I discussed Innovate, a Walton Funded “community-based” organization. Today I am publishing an exclusive letter about reformers stealing a community-based parents union from Mona Davids, a Black parent and one of the original founders of the original National Parents Union.

‘The Hypocrisy of the Education Reform Movement

There is a quote that is erroneously attributed to Albert Einstein.  The author is unknown but there are citations to the quote appearing since 1982.  The quote:

“The definition of insanity is doing something over and over again and expecting a different result.” – Unknown

While the author is unknown, the quote reminds me of Education Reformers and the moneyed foundations that fund their AstroTurf organizations.

I have lost count of the defunct local and national AstroTurf organizations during my decade of being an independent, grassroots, unbought and unbossed, parent advocate.  The inauthenticity, arrogance, chicanery and lies, of the many AstroTurf organizations seeded by tens of millions of dollars is what inevitably leads to their failure and downfall.

The arrogance and hypocrisy of many (not all) education reformers, their billionaire funders and their AstroTurf leaders who purport to care and advocate for low income, Black and Hispanic parents, is always exposed.  They shoot themselves in the foot every time.

The problem is the National Parents Union already exists and was founded in 2012.  I know because I am a founding member and it is incubated under the New York City Parents Union since 2012.

The president is supposed to be Keri Rodrigues Lorenzo, a White woman from Boston.  She is not Latina although she purposely misleads everyone to think she is.  Rodrigues Lorenzo is founder of Mass Parents United, that was created in 2017.  She is the former Massachusetts state director for the defunct, AstroTurf, Families for Excellent Schools. The ones responsible for the biggest, most expensive, education reform defeat in history.  It was epic.  Not only did the parents and people of Massachusetts see through and reject their hypocrisy, but the chicanery, corrupt, unethical and illegal actions of the education reformers resulted in historic huge fines and banishment from Massachusetts.

The other co-founder is supposed to be Alma Marquez from California who heads up another AstroTurf.  Marquez clearly has failed because education reform defeats in California keep coming with school districts seeking charter moratoriums.  Even high school students are speaking out against charters and for charter moratoriums in California.  Walton has wasted their millions on AstroTurfs in California and Massachusetts led by the same people they plan on giving more millions to steal and hijack a grassroots parents group name.

The new AstroTurf’s advisory board include John King, the former New York State Commissioner of Education, who was chased out of New York by parents and did a phenomenal job of disrespecting grassroots parents throughout the state resulting in the OptOut Movement.  Because of King, everything education reform related is toxic to New Yorkers resulting in the current charter cap fight.

King also tried to violate students, parents and teachers’ privacy rights by trying to give student and teacher data to the $8 billion dollar inBloom corporation without the consent of parents and teachers.  Alerted by Leonie Haimson from Class Size Matters, New York City Parents Union members sued King with other grassroots parents. 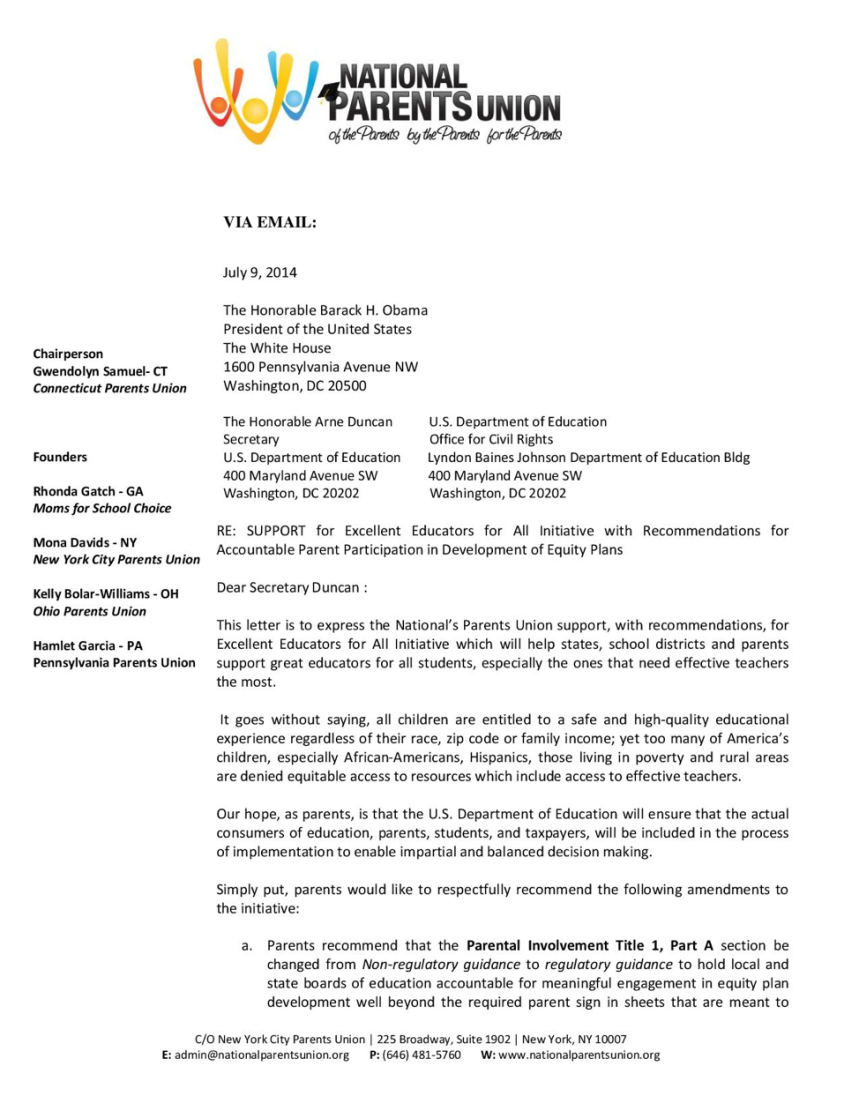 Democrats for Education Reform (DFER) is on the AstroTurf board and funded by Walton.  DFER is another huge failure.  Democratic legislators in statehouses throughout the nation and presidential candidates all want nothing to do with DFER and charters.  But it seems they think using parents through their new AstroTurf to push their partisan politics will help make them relevant to the presidential candidates, beat the teachers’ union, and their district schools supporters.

Most of the advisory board members are beneficiaries of Walton money and paid directly by them or through other AstroTurf organizations funded by Walton.

There is not an AstroTurf organization, defunct or still active, that Walton does not fund.  From StudentsFirst, to Families for Excellent Schools, to Great Schools Massachusetts, to Partnership for Educational Justice – all doomed to fail from day one because they are not organic, authentic and grassroots.

Thanks to the AstroTurf organizations and DFER, we now have charter moratoriums and an anti-charter fervor in communities and statehouses throughout the nation.  Because of the continued insanity of creating AstroTurf organizations that fool no one, students and parents from New York to California to New Mexico to Georgia and throughout the country, are paying the price of their arrogance and being denied additional school options.

The National Parents Union (NPU) is a coalition of grassroots parents and groups.  Just as most grassroots, parent groups, including the New York City Parents Union, the NPU is an informal group.  The excuse that because a parent group is not incorporated and trademarked it does not exist is a lame excuse.  The New York City Parents Union is an informal group and we have full legal standing in court, have filed and won lawsuits and changed education laws in New York.  Grassroots parents don’t have AstroTurf money to hire lawyers, consultants and staff to push our agenda. Grassroots parents work hard, sacrifice, donate their time, and are genuine in their advocacy.  This is why grassroots organizations are more successful everyday than multi-million-dollar AstroTurf organizations.

NPU, like all grassroots, informal, parent groups, is not AstroTurf, funded by billionaires, with high paid staff, lawyers and consultants.  NPU has been proudly grassroots from day one.  NPU shared its mission and agenda on a National Conference Call with speakers including former Senator Gloria Romero, who sponsored and passed the groundbreaking and historic Parent Empowerment Law in California.  The many parents, reporters and advocates that dialed into the conference call, others who have communicated with and received correspondence from NPU, can all attest to the existence of NPU in a court of law.

The NPU has taken positions on legislation nationally.  NPU members speak to different groups including college students studying education policy about the importance of grassroots, independent parent involvement.  NPU is non-partisan, we don’t subscribe to either political party.  NPU does not have a political agenda.  NPU does not support using parents as props to push a partisan political agenda.  NPU is not anti-union or pro-education reform.  NPU’s focus since 2012 is providing a safe and high-quality education for every child regardless of the school model.

Walton and some of the education reform leaders listed as the advisors of this latest AstroTurf organization cannot use the excuse that they were unaware of the name conflict because I personally called them and told them.  Some advisors listed were not even aware they were listed or had knowledge of Rodrigues Lorenzo’s new organization before contacted.  In addition, another NPU founding member informed Rodrigues Lorenzo of the same, see email below.  Not only did I inform Walton, but others privately spoke to them.

Nobody can dispute the fact that all the multi-million dollar, inauthentic, non-organic, AstroTurf organizations have resulted in the many incredible defeats experienced by the education reform movement throughout the nation.  These defeats are not because of the teachers’ union or the media, it is because of their arrogance and disrespect of the parents they purport to care about that is being exhibited with their unethical, stealing and hijacking of the name of the National Parents Union from poor, low income, parents of color, by rich, White, AstroTurf, education reformers.

The New York City Parents Union stands behind the National Parents Union.  Our parents are members of National Parents Union.  The New York City Parents Union and our Black and Hispanic parents have a long history fighting powerful interests and winning – even though we are an informal group, grassroots, with no money.  We fight for what’s right and we successfully fight against education reform bullies who think they can speak for and know better than grassroots parents – go ask Campbell Brown and the other failed, defunct, Walton funded, multi-million-dollar, AstroTurf organization, Partnership for Educational Justice.

But, clearly, ethical, honorable behavior does not apply to Walton, DFER, John King, Rodrigues Lorenzo, Marquez, and everyone else listed as their advisors.  They are thieves.  Plain and simple.

Go ahead, steal the name and continue to expose who you are and what your real interests are – because it is not the education and best interests of our kids.

Nobody will be fooled, and this will be the final nail in the education reform, AstroTurf coffin.

Looks like theft to me. What do you think?

For all of Cloaking Inequity’s posts on charters click here.

Yes!
Historic
Catching up on email next to the infinity pool
A margarita parade!
Twitter is now copying Clubhouse chat model
Sunday
More #foodporn
The view I woke up to this morning.
#breakfast
Our onboarding for the @AAHHEorg governing board was today! Looking forward to "working board" service with @VictorSaenzPhD @Profe_Rodriguez et al.! #whenazoombackgroundisreal
Rest in Power Walter Mondale
KY Senate confirmed!
It was an honor to be named for the 7th year as one of the top 200 most influential education professors (<.1% of 20,000 in the nation) by Education Week. I wish my great-grandmother was still with us to see how hard we are working to make a difference for children.
Justice
Taped promos for upcoming keynote for @cacadvocate. Speaking next week about racism, implicit bias and unearned privilege.
These kids are out here dancing #ftk #danceblue with our students raising money for the care of children in local hospitals. @universityofky @UKCollegeofEd
Spending the morning with my dean colleagues from the @SEC Colleges of Education. What a great group!
LOVED Papi’s #softopening today! #fajitas #greenenchiladas 10 of 10 and I’m a Mexican food #snob #critic
Michigan versus UCLA pre-game shoot around. #elite8 #marchmadness
Going to try to keep the heart rate reasonable during today’s #sweet16 game.