High-Stakes Testing, Accountability and The Simpsons

Posted on September 10, 2012 by Dr. Julian Vasquez Heilig One comment 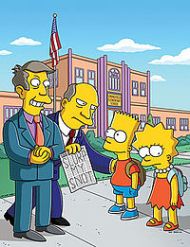 Who knew that high-stakes testing and accountability also impacts Bart and Lisa Simpson? Check out the episode “How the Test Was Won”

Bart accidentally receives a perfect score on a practice test for the upcoming Vice President’s Assessment Test, by writing “Slurp My Snot” across his page. This enables him to attend a special pizza party, with a helicopter as his escort. However, it turns out to be a clever plan to purge the school of all bad test takers. Bart actually failed the test and the helicopter is a disguised school bus. He, Nelson, Ralph, Kearney, Dolph, and Jimbo are driven to Capital City by Otto, along with Principal Skinner, who was pushed onboard the bus by Superintendent Chalmers [because he was designated as a low-performing principal]… At school, Lisa is unable to focus on the test, as the thought of Bart being smarter torments her. When the test ends, she has not answered a single question, along with the fact that the test is nearly impossible (the choices to a question’s answer all mean the same thing, and there is a penalty for guessing). However, Skinner returns just in time to cancel the test and lift the school’s “ban on dancing.” Source: http://en.wikipedia.org/wiki/How_the_Test_Was_Won