I am organizing a fundraiser for Tony Thurmond’s campaign for California Superintendent of Public Instruction. Will you please pitch in today at https://act.myngp.com/TonyThurmond/august30 so we can defeat Marshall Tuck and his public education privatizer/ reformer supporters? Donations of EVERY size matter.

Marshall Tuck, his opponent, has millions, but we have people power.

Thurmond is also endorsed by the Network For Public Education Action, a C4 where I serve as a founding board member. Here is our press release about the endorsement:

Assemblyman Thurmond has been a member of the State Assembly since 2014. He serves on the Assembly Committee on Education, and has made education policy his top priority. Before serving in the legislature, he was on the West Contra Costa Unified School District Board for four years.

Thurmond is passionate about improving public schools. His public school education prepared him for a 20-year career in social work, where he ran after-school programs and taught life skills and career training. Those years of experience provided him with a unique perspective into the lives of California’s youth.

Thurmond told us that he will “ensure that every California student gets the education they need to realize their potential,” adding that “California is the 6th largest economy in the world, yet ranks 46th in per pupil spending in the United States. We cannot continue to underfund California’s public education.” 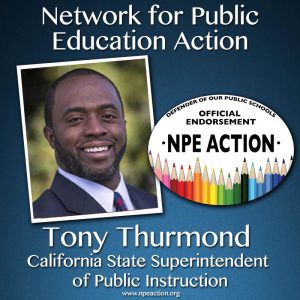 He understands that class size has proven to be one of the most important factors in a child’s learning. Thurmond said that he will “support legislation, policy changes, funding to reduce class sizes.”

Charter school issues are sure to be a central focus of the election. Thurmond’s opponent, Marshall Tuck, is a former charter school executive and CEO. In 2014, Tuck ran an unsuccessful campaign for State Superintendent, losing to incumbent Tom Torlakson. Tuck was heavily funded by outside money from national charter advocates, including Michael Bloomberg, Eli Broad, the Waltons, Laurene Powell Jobs, Arthur Rock and John Arnold. Thurmond stated that, “California’s voters don’t want this election to be bought by the Walton family, Eli Broad, and other billionaires who want to privatize public education.”

Thurmond has vowed to “lead the resistance against Donald Trump and Betsy DeVos and their agenda to undermine and defund our public education system,” promising that he will not support policies that seek to divert taxpayer dollars from public education to private schools.

Thurmond has already received numerous endorsements, including the endorsement of Superintendent of Public Instruction, Tom Torlakson. Thurmond will be on the general election ballot on November 6th. NPE Action urges our over 21,000 supporters in California to educate and inform your friends, family, neighbors and colleagues about Thurmond’s campaign and the importance of this election for the future of public education in California.

I’m asking in my personal capacity to please give generously today at https://act.myngp.com/TonyThurmond/august30