“This spring, tests developed by the Smarter Balanced Assessment Consortium will be administered to well over 10 million students in 17 states to determine their proficiency on the Common Core State Standards for Mathematics (CCSSM). This analysis of mathematics test questions posted online by Smarter Balanced reveals that, question after question, the tests:
* Violate the standards they are supposed to assess;
* Cannot be adequately answered by students with the technology they are required to use;
* Use confusing and hard-to-use interfaces; or
* Are to be graded in such a way that incorrect answers are identified as correct and correct answers as incorrect.
No tests that are so flawed should be given to anyone. Certainly, with stakes so high for students and their teachers, these Smarter Balanced tests should not be administered. The boycotts of these tests by parents and some school districts are justified. Responsible government bodies should withdraw the tests from use before they do damage.”…  (Read full report on http://mathedconsulting.com)

So it seems we have a situation where millions of dollars of public tax dollars and countless hours of wasted instructional time have just been spent on scores that will likely be meaningless, and that the general public has been led to believe are accurate indicators of learning and skill. For an example of what a “score report” is proposed to look like, download a sample here.
Widespread technological meltdowns with many new computerized tests have led to severe disruptions in many states. Jesse Hagopian and his colleagues in an April 7th Press Conference from the NAACP in Seattle describe how the situation with SmarterBalanced testing has unfolded in Seattle:

“The SBAC testing in Seattle has been an unmitigated disaster. We have had reports across this city of absolute testing meltdown in building after building. You’re going to hear today from some of the people who have experienced that first hand. They’ve experienced the technological gliches that have wasted hours of instructional time. They’ve experienced their computer labs and their libraries shut down for weeks at a time and unable to be used for research. And they’ve experienced the human disaster of labeling kids failing and seeing the impact that that has on children and crushing their spirits, turning them off to education…”
“…I want to say that these tests are invalid… the SBAC test is invalid. That’s a bold statement. How can I make that claim? It’s not based on my own estimation. It’s based on the SmarterBalanced Consortium itself. The SmarterBalanced Consortium has acknowledged in a memo, that the test has not been proven to be externally valid. And yet our state rushed to implement this test all across the state?” – Jesse Hagopian

In addition to the motivational fallout likely to occur with the vast majority of youth who are projected to fail the tests (according to the set “cut scores” by the SmarterBalanced Consortium), the majority of parents report not knowing about the new tests nor how they will be used.
And yet we see the following news:

“Nearly 200 colleges and universities in six states have agreed to let students skip remedial coursework if they reach the college-readiness score on the 2015 Smarter Balanced assessment.  Wednesday’s announcement marks a major development in the consortium’s bid to convince higher education to accept the “college-ready” cut score on its 11th grade test for course-placement purposes. Until this week, it had only the state college and university systems in two states signed on. Now that list has grown to 197 campuses in six states.”

So here we have a situation where nearly 200 college and university representatives in six states have just signed on to using test scores from a deeply flawed, experimental test that lacks independently established validity/reliability, in order to determine a student’s access to either the regular college curriculum or a remedial track (with a much higher likelihood of dropout).

Do students know about this?

Have parents been informed?

What about the 11th graders who were told that this year’s tests “wouldn’t count” or that they were only being used to establish a baseline and now it turns out the [invalid] 2015 scores will apparently count for students who planned to attend any of the 200 colleges that signed on? Here are the projected failure rates for the 11th Grade SBAC test: 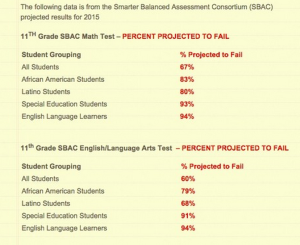 How will the tests be scored?  That’s yet another story:  http://www.kcra.com/news/whos-grading-your-kids-assessment-test-in-california/31857614

Readers are encouraged to check out Jon Pelto’s “Wait, What?” blog that captures excellent commentaries on SBAC: He wrote No, the Common Core SBAC Test is Not Like a Blood Test and More than 90% of English Language Learners Projected to Fail Common Core SBAC Test. For a brief look at how the higher education news above will be likely to impact 11th graders who have just taken or are about to take the test check out the post Stamford principal climbs on SBAC Opt-Out abuse wagon.

Check out her compendium of information about high stakes assessments at Testing, Testing, 1, 2, 3 below.

#NationalTeacherDay Gratitude to all educators! #ThankATeacher by learning about current issues in #education-> http://t.co/L4uLszo9Wl

For more on controversies surrounding the development and implementation of the Common Core, see Dewey, Testing Companies, and the Origin of the Common Core, for the Opt Out of testing movement, see Who’s the William Wallace of testing: @JessedHagopian or Liz King?, and on high-stakes testing, see Does High-Stakes Testing & Accountability= Social Justice & Civil Rights?

For all of Cloaking Inequity’s posts on Common Core go here.