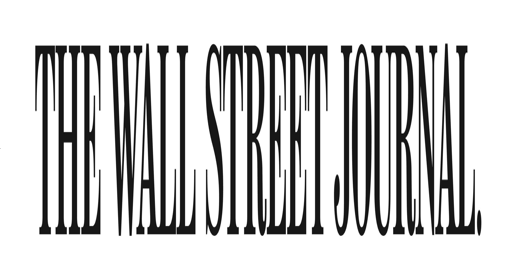 There is no shortage of hype from charter chains these days. I recently read a column published March 9 in the Wall Street Journal authored by Charles Cook and Terrence Moore. They sought to make their column relevant for the current education policy conversation by critiquing proposals for changing high-stakes exit testing in the Texas Legislature and then repeating a common meme that our students don’t know enough specific facts about history. Then, once the small talk had concluded, they get to what I suspect they really wanted to talk about— their rapidly expanding charter school network (See excerpted WSJ column below).

They argue that reducing the number of tests “waters down the standards.” However, excessive testing does not equal high standards. As I have discussed extensively on my blog Cloaking Inequity, this is a fallacy that has permeated our educational policy since No Child Left Behind was imported from the state of Texas. What they don’t mention is that some districts in Texas spend almost 25% of their days testing. What is the point of testing for the test to test? How is less teaching and more testing raising standards? After more than two decades of trying to test our way to equality, Republicans and Democrats (prodded by TAMSA and others) in Texas have realized the fallacy of the argument that more testing is raising standards and that less testing is lowering standards. No matter how many speedometers you have on a car, they are all going to tell you that you are going the same speed.

I do not disagree that a liberal arts education is important. However, every so often folks trot out studies that say U.S. students don’t know this about Christopher Columbus or that about the founding fathers. I majored in history at the University of Michigan. While I can identify Adolph Hitler, I would be stressed to name all of the founding fathers off the top of my head and their particular philosophies. I believe their broader point should be that the liberal arts has suffered at the hands of math and science because teaching to the test for core subjects has lowered their relative priority. I published an article with this argument examining the impact of No Child Left Behind and the narrowing curriculum in the Arts Education Policy Review a few years ago.

The third part of their column seeks to publicize their network of charter schools that purportedly focuses on classical education. While I have not visited Responsive Education’s charter schools, their website describes their approach in Austin.

This program, based primarily on the Premier model, delivers individual students a prescribed course of study. Using individualized curriculum plans well as direct teaching, paper-based curriculum and computer-based instruction, students can recover credits, accelerate credit accrual, and receive high dosage tutoring in math and other needed areas. In an effort to better provide high-quality instruction and academic opportunities for all Austin-area students, the Austin Independent School District and local charter school leaders have come together to form the Austin District Charter Collaboration Compact.

From this description, it appears that their Austin operation focuses less on classical education and more on accelerated education. Nevertheless, while the elegant argument about the importance of a liberal arts education was quite convincing, a quick descriptive statistical analysis of Responsive Education district’s college readiness data show large gaps across demographics between their high schools and those across the state (See table below). For example, in 2010 the college readiness gap for all students enrolled in Responsive Education high schools was twelve percentage points between their high schools and the state. For Latinos, this same gap is 21 percentage points. On the SAT and ACT, the college readiness gap for all students is 13 percentage points below the state average. These large gaps leave a different impression than the convincing argument presented in the Wall Street Journal. In sum, while I disagree with their very commonly heard argument about “lowering the bar,” I do not disagree that the liberal arts are very important to our schools and a vibrant democracy. However, college readiness data from the Responsive Education district charter high schools in Texas do not appear to support their logic leaps in the Wall Street Journal column. From the college readiness data, it appears that Responsive Education is another case of grow does not necessarily equal good and perhaps needing a dose of a “serious level of accountability.” See Cloaking Inequity’s full thread on charters here. 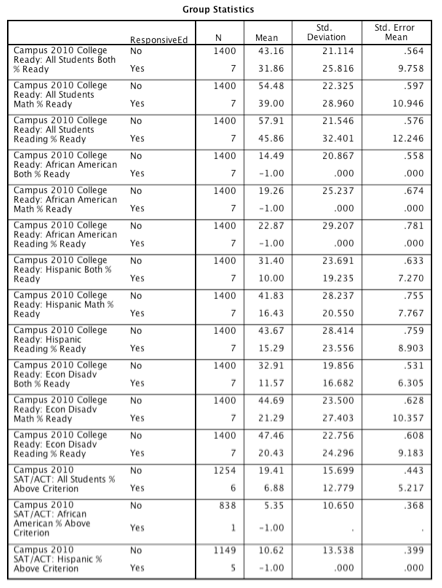 *The -1’s denote not enough data in the PEIMs dataset for calculation by SPSS. I used 2010 data because that is what I have on my laptop. I am working on cleaning a new 2012 PEIMS school-level dataset.

This article appeared March 9, 2013, on page A11 in the U.S. edition of The Wall Street Journal, with the headline: Doing a Texas Two-Step Around Education Reform:

By CHARLES COOK AND TERRENCE MOORE

For decades, policy makers have gone back and forth adopting the latest fads in school reform without any measurable improvement in learning. The latest trend in Texas is to de-emphasize the liberal arts and increase instructional time spent in math, science and technology.

As the Texas legislature convened last month, a coalition of anti-testing organizations, including Texans Advocating for Meaningful Student Assessment, promoted a plan to gut the state’s tough new high-school graduation standards. Instead of passing 15 end-of-course exams, a student would graduate by passing two or three. More than 800 Texas school boards have adopted a resolution to water down requirements.

We disagree. States across the country are increasing graduation standards, and Texas cannot afford to water down its own. A proposal to eliminate exams in world geography and world history as a graduation requirement, for instance, is shortsighted. Ever-lower expectations lead to one predictable outcome: a profound ignorance of the world among young people in an era when international events and evolving fiscal and trade policies have a personal impact on communities, businesses and individuals in every corner of the U.S.

Who hasn’t heard or seen the signs of this ignorance? To cite one of many now-familiar results, there is the 2008 report “Still at Risk: What Students Don’t Know, Even Now” by Frederick Hess. It found that nearly 25% of 17-year-olds surveyed nationwide could not identify Adolf Hitler. More than 25% believed Christopher Columbus set sail for the New World after 1750. Forty percent could not place World War I as occurring between 1900 and 1950. Nearly 40% could not identify the Renaissance as the period in European history noted for cultural and technological advances.

Allowing young people to graduate as historical or geographical illiterates is myopic for another reason. Training them for getting jobs is not good enough; graduates of public schools are also citizens. Ask any physician today whether politics affects his livelihood.

We have a different approach to equipping students to face the future, one that has the weight of millennia of human experience behind it: a rigorous classical education. Such an education (called liberal-arts at the college level) does not shortchange math and science. On the contrary, those subjects are studied with more rigor than can be seen in today’s public schools.

Students also learn the fundamentals of English grammar; American and world history through the reading of primary source documents; and the great stories of human struggle and yearning told by the greatest storytellers—Homer, Shakespeare, Milton and Melville.

They study the principles of liberty and self-government as articulated by the Founding Fathers and the ennobling beauties found in painting, sculpture and song. Yes, the children have to learn Latin, too, just as the Founding Fathers did, because that language gives the greatest insight into the vocabulary and grammar of our own tongue and the Romance languages, including Spanish.

Certainly America needs as many engineers and computer scientists as the country requires in the 21st century. But that does not describe what lies ahead for the vast majority of young people entering the marketplace. The most common complaints of American employers is that job applicant and recent hires lack communication skills and higher-level thinking skills. More plainly, many applicants cannot read a memo, they cannot express themselves in speech or in writing, they lack the ability to think through difficult problems.

Training young people in the liberal arts and sciences also will better prepare them to become “the boss” when it is time for the present cohort of bosses to retire. Those on the front lines of hiring employees in this state see the need for a classical education. Now parents are increasingly demanding such an education for their children. We know this in part because the number of schools that have come to Hillsdale College each spring in search of graduating seniors to recruit as teachers of classical subjects has more than doubled in the past five years.

Before long, we will begin to see how well the approach works. Responsive Education Solutions (ResponsiveEd), the largest charter-school system in Texas, in collaboration with Hillsdale College, is providing students the opportunity to receive a rigorous classical education tuition-free. Founders Classical Academy is a public charter school that opened near Dallas in August 2012. The response has been almost overwhelming. The school initially started with 450 students and will educate more than 700 next year.

Classical-curriculum schools in other states, such as Ridgeview Classical Schools in Colorado, generally have waiting lists of over a thousand applicants. The graduates of such programs go on to college to study the liberal arts and sciences. Typically, the biggest complaint of these graduates is that their freshman courses were too easy.

As ResponsiveEd and Hillsdale College continue to open classical schools across the country, we want to see other schools, including noncharter public schools, brought up to a serious level of accountability as well.

Jobs do not create the human mind; the human mind creates jobs. As a result, the very best education—the kind the Founding Fathers had—is what will produce good workers and good citizens. The challenge for those who want to eliminate testing in world history and geography or other subjects in Texas is to explain how students are prepared for a global economy when they are not required to learn anything about either the globe or the economy.

Mr. Cook is CEO of ResponsiveEd, a charter-school district with over 60 schools in Texas. Mr. Moore is a Hillsdale College professor of history who advises the college’s Barney Charter School Initiative.