Today is my first hunger strike— my first fast.  I have the opportunity today to learn from the example of Jesus Christ, Ghandi and Cesar Chavez. I stand in solidarity with 12 parents and community member who are on hunger strike for community-based public schools. I challenge you to join the fast today August 25, 2015.

Mohandas Karamchand Gandhi, popularly known as Mahatma Gandhi or The Father of the Nation in India, undertook 17 fasts during India’s freedom movement. His longest fasts lasted 21 days. Fasting was a weapon used by Gandhi as part of his philosophy of Ahimsa or Non Violence. (Via Wikipedia)

Jesus fasted for forty days and nights in the Judaean Desert. That long fast of Jesus strengthened Him to endure.

In February to March of 1968, Cesar Chavez started his first hunger strike— it lasted for 25 days in February and March to stop violence against farmworker strikers. During that strike Martin Luther King Jr. sent him the follow telegram.

In the telegram, MLK stated,

Our separate struggles are really one. A struggle for freedom, for dignity, and for humanity.

During my first fast in 1968, Dr. King reminded me that our struggle was his struggle too. He sent me a telegram which said “Our separate struggles are really one. A struggle for freedom, for dignity, and for humanity.”  I was profoundly moved that someone facing such a tremendous struggle himself would take the time to worry about a struggle taking place on the other side of the continent. Just as Dr. King was a disciple of Ghandi and Christ, we must now be Dr. King’s disciples.

On August 17, 2015, in this tradition of activism for freedom, for dignity, and for humanity, 12 parents from Bronzeville and allies from communities across Chicago launched a hunger strike on in front of Dyett High School to protest the continuing and persistent injustice suffered by communities of color at the hands of CPS and the appointed Board of Education. 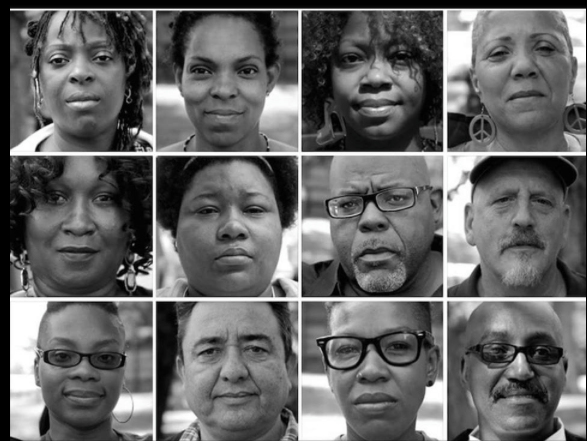 We are willing to starve ourselves to bring justice to our children and our community!

In past I have written about Rahm’s reign of “educational reform” terror in the post Bloomberg and Rahmbo: Sleight of Hand Artists. The reality of Rahm sponsored school closures in School Closure and Race Infographic: Something fishy going on in Chicago? and Mouth agape: What the data tell us about school closure in Chicago.

Today I want to update you on the Dyett situation. I will begin by taking excerpts are from the document Dyett High School & The 3D’s Of Chicago School Reform: Destabilization Disinvestment Disenfranchisement written by Rhoda Rae Gutierrez and Pauline Lipman, University of Illinois at Chicago, Collaborative for Equity and Justice in Education.

Walter H. Dyett High School sits in leafy Washington Park on Chicago’s south side African American
Bronzeville neighborhood. In February 2012, Chicago’s mayor-appointed Board of Education voted to phase out Dyett for poor performance and send students to Phillips High School, an Academy of Urban School Leadership turnaround school 2 ½ miles away. However, Phillips is doing no better than Dyett on district performance measures. Dyett’s story has been repeated in almost 100 public schools in Chicago’s African American and Latino communities and in cities across the country where an increasing number of mainly urban school districts are using this new shock treatment on schools serving low-income students of color.

The 3D’s Of Rahm’s Chicago School education reform have been: Destabilization Disinvestment Disenfranchisement

Destabilization
Dyett has been in the center of a whirlwind of school churning. Since 2001, CPS has closed, turned around or converted to charter or selective enrollment 20 area schools near Dyett. Between 2005 and 2010, four high schools on the South Side near Dyett were closed. Students were sent from school to school, and schools that were community anchors closed, further destabilizing a community destabilized by destruction of public housing and gentrification. In 2006, Dyett was a receiving school for closed Englewood HS students, but received no additional resources for the influx of students. That year there was a spike in school violence. In its 12-year history as a high school, Dyett has had a revolving door of leaders, including 4 principals

Disinvestment
Dyett was set up for failure from the beginning. In 1999, CPS converted Dyett from a middle to high school but provided no high school resources. On opening day, there were just seven books in the library and unequipped science labs, yet the school was expected to meet district performance standards. In the same year, CPS invested $24 million to convert nearby King High School into a selective-enrollment magnet school.

Disenfranchisement
Dyett’s students, parents, and community members have been stripped of their right to participate in decisions about their school. Like other African American and Latino schools closed by CPS, Dyett was subjected to a sham CPS hearing in which participants were restricted to two minutes to speak, decisions were made behind closed doors by an unelected school board, and paid protesters, recruited by pastors allied with the mayor, supported Dyett closing.

But there is an alternative to Rahm’s 3D’s. Here is the community-based plan for Walter H. Dyett Global Leadership & Green Technology High School created by The Coalition:

Our mission is to have a student-centered community school with a culture of high expectations that, through its partnership among teachers, administrators, parents, and community residents, provides every student an exceptional education with an emphasis on leadership development and green technology.

The Coalition to Revitalize Dyett HS grew out of several years of work by hundreds of parents, students, teachers, administrators, community members, education professionals, and others to create a connected “village” of Dyett and five feeder schools. However, the Board of Education derailed plans when it voted to close Price Elementary, turnaround Fuller, and phase-out Dyett. Nonetheless, residents regrouped and created a proposal for a revitalized Dyett HS, to save the only open-enrollment, public HS in Bronzeville.

Dyett Global Leadership and Green Technology Community High School will develop our students into “community centered scholars,” with the confidence, competence and compassion to positively develop themselves, their school, their community, and society overall. Our high school will be thoroughly grounded in, connected to, and build on Bronzeville’s rich history and culture; prepare all students for post-secondary education or meaningful career opportunities; educate young people to be leaders of our community, city, nation, and world; use restorative justice and care for and respect all members of the school community; ensure comprehensive, appropriate, wrap-around supports for every student; be a community school, open till evening and on the weekends; have a farm next door in the park, a rooftop garden, and a culinary arts program; arrange for students to have significant internships with community organizations; challenge students academically in meaningful ways and assess them fairly; connect curriculum to real issues in the lives of students and community members; deeply value community wisdom and treat family members as real partners; connect to feeder schools in the community and develop a K-12 educational village.

The school is mainly for Bronzeville residents who have almost no open enrollment schools, but space permitting, and even by design, we propose to always accept students from beyond neighborhood borders.

Dyett will have a regular CPS LSC with all powers: selecting the principal, controlling the discretionary funds, and creating the school improvement plan.

Our philosophy of education is to prepare young people to study and understand their social and physical reality to take part in history as actors in transforming their world. In the process, they learn the academic and artistic disciplines necessary for their own development and future life plans and for contributing to better our planet. We believe that education should value and build on community culture, language, experiences, history, wisdom, and elders to enable young people to know who they are, where they come from, where they are going, and to love their community and themselves.

For further information contact Duane Turner or Jaribu Lee, 773-548-7500, or duaneturner2@gmail.com or Jaribu.plee@kocoonline.org

This situation is not unique to Chicago. We see the same playbook in Detroit, New Orleans and elsewhere.

Since Arne Duncan, former CEO of Chicago Public Schools, was appointed to head the U.S. Department of Education in 2009, the Chicago model for top-down school reform has gone viral.

Please join me today August 25th to hunger for community-based public schools in solidarity with the Chicago 12.

That it’s 2015 and not 1950 and black people have to go on a hunger strike to get a neighborhood school—it says to me I’m not even human. Dyett Parent

Walter H. Dyett
HIGH SCHOOL CHRONOLOGY
(August 2015)
1972 Opened as a middle school in the north end of leafy Washington Park in the Bronzeville
Community on Chicago’s Southside.
1999 CPS began turning nearby King HS into a selective enrollment
school, meaning that 2003 neighborhood residents who failed to “test in” had to go elsewhere.
1999-2003 That “elsewhere” turned out to be Dyett, which CPS made a HS over a summer, with no additional resources. CPS gave King, however, $24 million.
2003-Present Community/LSC works to strengthen Dyett HS, bring resources, develop school culture.
2006 CPS closes nearby Englewood HS, sends 125 students to Dyett with no extra resources.
2008 Then-CEO Arne Duncan and then-Mayor Daley hail Dyett as a model school.
2009 Chicago Botanic Garden and Dyett co-develop an urban garden, still an integral part of the
school, to be expanded in the “revitalized” Dyett.
2010-2012 Bronzeville parents, students, teachers, residents, and education professionals begin planning a six-school “village,” of Dyett and five feeders. CPS is well aware.
2012 [Mayorally-appointed] CPS Board of Ed votes to close/turnaround two Dyett feeders and phase-out Dyett by 2015, (temporarily) scuttling the Bronze Global Achievers Village (BGAV) plan.
2013 The Coalition forms and begins planning the revitalized Dyett, to be a neighborhood HS, open to all in the attendance boundary, grounded in global leadership/green technology. Community and supporters, led by KOCO, continue protesting CPS’ actions on Dyett.
2014 April. The Coalition submits an unsolicited full proposal, based on the years of work and planning on the BGAV, to the Board of Ed and demands that Dyett be reopened.
2014 December. CPS spares Dyett, but begins RFP process to include contract schools. Coalition pushes forward, building support and demanding a neighborhood public school.
2015 April 6. Three teams, including the Coalition, submit proposals, CPS refuses to name applicants until late May, and after public pressure.
2015 June 17. CPS holds community forum at King HS (ironically). Community overwhelmingly supports Coalition proposal, 34 of 45 public speakers in favor (75+ %).
2015 August 10. CPS was to hold public hearing (originally scheduled in December 2014), but August 7th, they release a press release postponing it until Sept 15, w/no direct notice to us.
2015 August 26. Board of Education was to vote on the proposals and decide which team will have the school.
TABLED UNTIL FURTHER NOTICE